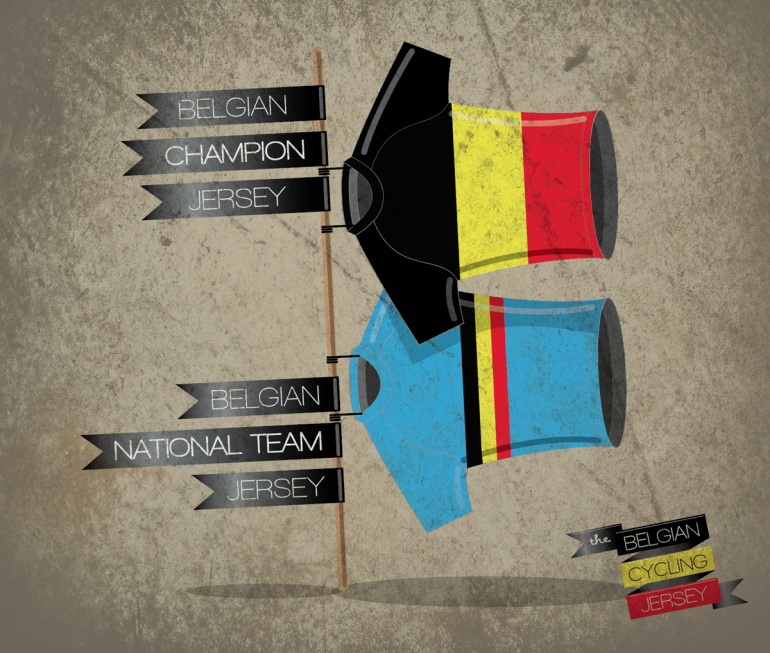 When lines drive you crazy

The past 7 years we have been designing more than 20 national champion’s jerseys and with each design, the same question popped up: Why oh why are the lines on the official Belgian champion jersey running horizontally while they are directed vertically on our official national flag?

At first, I honestly didn’t spend too much time wondering about the issue, I didn’t even bother to cross-check the rules. Like a sheep  our company has been reproducing Belgian Champion jerseys using the same old template with horizontal stripes ever since. Last July we had the pleasure to create another 4 champion designs for a bunch of talented bikers riding our custom NODRUGS cycling wear. It is during that period that the question popped up again and it didn’t leave ever since.

Do you know this story? You are wondering about something but it doesn’t seem to be important enough to really find out the answer. Actually, most people I know wonder about things that never get answered and most people seem to be at ease with it. So am I… usually… but sometimes you start wondering about exactly the same thing a few months later though it still isn’t a priority to find the answer. After a few times crossing your mind in a few years time, the issue starts to really bother you and you just need to find to answer to get peace. Ever experienced this? Well, that’s exactly what happened to me.

And today, on September 8, 2012, after watching the World Championships mountainbike featuring some Belgians riding the national outfit, a second question crossed my mind: Who decided the national team’s jersey should be blue?

The champion jersey is one thing, but for those out there who are not familiar with the subject: We also have a national jersey that all riders selected for the national team are wearing. The design of this specimen is even stranger though visually more powerful since it is mainly light bleu with a Belgian tricolore running along the chest… in horizontal direction off course.

That’s the straw that broke the camel’s back so I instantly decided to start ‘a little’ research on the history of the Belgian cycling jersey. I had no idea where this would lead me to, but I just had the urge to do so since wondering about the answer was literally driving me crazy! Around 11 pm tonight my first blogging experience was a fact.

Thebelgiancyclingjersey.com is meant to be an interactive research diary. It helps me collect and structure information and thoughts and share them with you who seem to be interested enough to read this blog. Let’s make a promise to myself and to you: I will do whatever it takes to find out the true story behind our Belgian (championship) jerseys.

I welcome you to join the discussion!