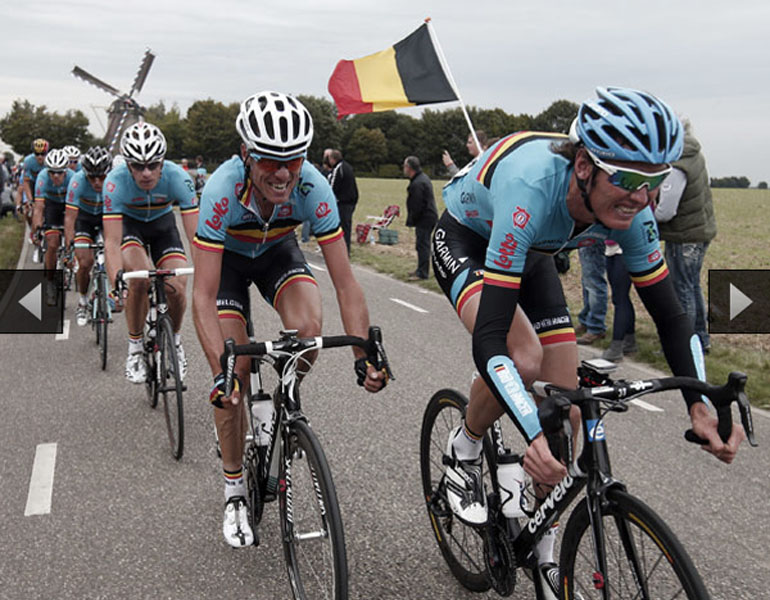 I saw -and with me a few million other cycling fanatics- a tremendous race today. The light blue jerseys of the Belgian team were clearly visible throughout the World Championship race in Valkenburg. The whole peloton had been watching the Belgian ‘smurfs’ all day. Everyone expected Gilbert to strike on the final climb of the Cauberg, nevertheless the whole world was dazzled by the explosive power he displayed.

Since I am writing this blog, I started looking at the national selection jersey in a new way. I am still trying to figure out when, why and by whom the first national team jersey was issued as well as the reason behind the light blue color. But I gladly admit that Tom BOONEN, Kevin DE WEERT, Philippe GILBERT, Björn LEUKEMANS, Gianni MEERSMAN, Jürgen ROELANDTS, Greg VAN AVERMAET, Dries DEVENYNS en Johan VANSUMMEREN were looking awesome in their blue national team jerseys.

I still didn’t decide however whether it is the jersey itself either the strong performance of the Belgians that empowers its design.

© 2021 The Belgian Cycling Jersey | With the support of Sportune.com.